Find Out Interesting Facts and Uses of the Maple Wood

When you were a kid, did you ever play with the “helicopter” seeds that whirled in circles as they dropped from above? Or did you only discover these seeds as they started collecting on your windshield after you moved north for college? These seeds belong to the maple tree, one of our continent’s most cherished trees. There are more varieties than you could count on both hands, with hundreds of uses, including the delicious barbecue smoking of your meat or cheese.

The Maple Tree, Its Cultural Significance, and Home

These color-changing trees, observed by tourists annually in autumn months, live in Asia, North America, North Africa and Europe, with only one species making it into South America.

While we’re familiar with the significance of the Maple Tree in Canadian culture, the Maple Tree holds great significance to the Japanese as well. If you observe their kimonos, paintings and other art forms, you will notice a coupling of maple trees and deer, considered a “good pairing.”

In fact, the Maple Tree is so significant to some parts of the Japanese culture that entire cities, like Hiroshima, claim the Maple tree as their symbol.

Maple trees are some of the most beautiful trees in autumn. Their leaves change to yellow, orange or red, giving us the bright colors North America is so famous for in October each year. But did you know that there are over 120 species of maple?

These range from the familiar Red Maple, as seen on the Canadian flag, to the smaller varieties used in the Japanese art of Bonsai growing. Among these species, there are two over-arching types, the hardwood maple, and the soft maple.

Hardwood maple varieties, such as the Sugar Maple, include those used for flooring and furniture construction, and softwood Maples are used more for things like paper pulp and cabinet frames.

Uses for Maple Syrup and the Maple Tree

Who doesn’t love a maple syrup drenched stack of pancakes? A large variety of products come from this beautiful tree, including that delicious sugary stuff made from the sap. The delicious, sticky syrup is used as sugar replacement for those who avoid cane sugar, is used in recipes like maple cookies, candies like Maple Nut Goodies, and can even be added to a plain soap base to make sweet, non-sticky maple syrup soap. 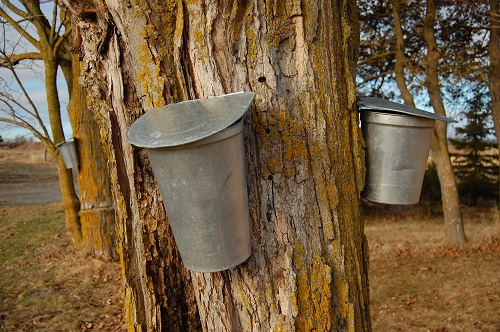 Interestingly enough, this sweet substance has some great health benefits. It’s high in antioxidants and manganese, and provides small amounts of other important minerals like zinc, iron, and potassium.

This beautiful tree has some amazing patterns in its grains, with softer shades ranging from light brown to white. Because of this beauty, it’s often used for a host of things we look at often. Some of the other things maple trees give us are:

But is Maple Wood Good for Smoking?

But what we’re interested in mostly is the benefits of using Maplewood for smoking. Does it affect the taste? How do you go about getting it?

First off, every kind of wood used to smoke food effects the taste of the meat, cheese or vegetable. If you’ve purchased hickory smoked turkey, you may note that it will have a stronger smoke taste than say, well, maple smoked ham will have. The maple lends a sweeter flavor because as the smoke surrounds and goes through the meat, the qualities of the tree will infuse themselves into the meat.

Maple happens to be a sweeter wood, after all, maples are known for sweet sap, so the meat or cheese will have a subtly sweeter flavor than something smoked with the more neutral tasting oak smoke will have.

What Kinds of Food Should You Smoke with Maple Wood?

Since maple lends a sweeter flavor to food than other non-fruit trees, poultry, ham, and other milder flavored foods will benefit from this smoke. With the right recipes, fish smoked by maple wood could also be the perfect option, though is more commonly smoked with alderr wood.

Where to Get Maple Wood for Smoking

While you could go out and hack down a maple tree for yourself, an easier solution is going into your local hardware or home goods store, like Lowes, Home Depot or even Wal-Mart. Wherever they sell smokers and grills, you’re likely going to find a variety of woods, including the popular Maple.

If you’re looking for sweet smoky goodness the next time you smoke some meat, definitely give maple wood a try and find out why it’s one of the most popular trees in the world.